You are here: Home » About Us

In 1980, Nancy G. Brinker promised her dying sister, Susan, that she would do everything in her power to end breast cancer forever. In 1982, that promise became the Susan G. Komen® organization and the beginning of a global movement. What was started with $200 and a shoebox full of potential donor names has now grown into the world’s largest nonprofit source of funding for the fight against breast cancer. To date, we’ve invested more than $2.9 billon in groundbreaking research, community health outreach, advocacy and programs in more than 60 countries. Our efforts helped reduce deaths from breast cancer by 38 percent between 1989-2014 and we won’t stop until our promise is fulfilled.

Our Vision: A world without breast cancer 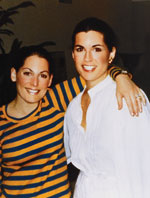 Our Mission: Save lives by meeting the most critical needs in our communities and investing in breakthrough research to prevent and cure breast cancer.

Our Bold Goal: Reduce the current number of breast cancer deaths by 50% in the United States by 2026.

About the Central Tennessee Affiliate

1992 – More than 500 people gathered in Centennial Park in Nashville to participate in Greater Nashville’s first Race for the Cure®.  During the next six years, the Greater Nashville Race was managed under the umbrella of the Sarah Cannon Cancer Center at Centennial Medical Center.

1997 – The Greater Nashville Affiliate was founded through the leadership of Junior League of Nashville members, Shana Alford and Barb Sawyer.  Shana, a Breast Cancer Survivor herself, became the first president of the Affiliate, and Barb served as the first Race Chair. Through their leadership, along with countless volunteer efforts, the Greater Nashville Affiliate served Cheatham, Davidson, Dickson, Maury, Montgomery, Robertson, Rutherford, Sumner, Trousdale, Williamson and Wilson counties.

1999 – The Chattanooga Affiliate was established under the leadership of David Watson and Sarah Bowen. The first Race for the Cure® was held in the fall 2000.  It brought 4,300 people to the newly opened Coolidge Park.  The Komen Chattanooga Affiliate served 10 counties in southeast Tennessee: Bledsoe, Bradley, Grundy, Hamilton, Marion, McMinn, Meigs, Polk, Rhea and Sequatchie, and six counties in Northwest Georgia: Catoosa, Dade, Fannin, Murray, Walker and Whitfield.

Susan G. Komen®, the world’s leading breast cancer organization, is laser-focused on saving lives and creating a world without breast cancer.  To make that vision a reality we employ a unique, 360-degree approach to discovering breakthroughs for the most aggressive and deadly breast cancers, while ensuring everyone gets the care they need – no matter who they are or where they live.  By investing in Komen, you are helping to accelerate research while also ensuring your neighbors facing breast cancer today get the help, support and treatments they need to live longer, better lives.

To see financial documents such as our 990, please click here.